1 Why Switch to Linux

Chapter 1, Why Switch to Linux, includes the following four sections:

1.1 Top Ten Reasons to use Linux instead of Windows
1.2 Why Linux is much safer and more secure than Windows.
1.3 The Fatal Flaw of the Microsoft Windows Monopoly
1.4 UEFI and the Microsoft Kill Switch

The Windows operating system has always suffered from several major flaws. These problems include Microsoft's collusion with the NSA in 1998 to create an open back door to all of our Windows computers through the Microsoft Web Browser. This open back door has caused a security nightmare leading to a constant stream of super bugs, “updates” and computer crashes. As if this NSA Open Back Door was not bad enough, Windows 8 and 10 added two more problems by attempting to create the world's first “dual” operating system (having two separate control panels) and imposing a monstrous start up program called UEFI with a horrific add on called Secure Boot. UEFI is now a mandatory feature of all Windows computers leading some to refer to UEFI as the “Microsoft” Kill Switch – because UEFI gives Microsoft complete control over any computer that has this monstrous startup program installed on it. The only way to avoid this problem is to use Linux instead of Windows. Even if you are not concerned about Microsoft or the NSA killing your computer or spying on you, this chapter provides a summary of the many huge benefits you will get by switching to Linux. 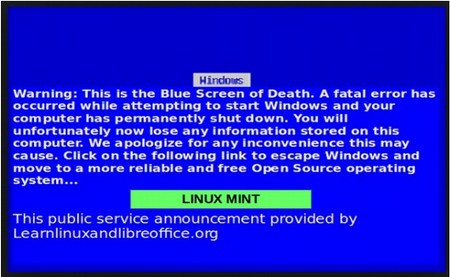 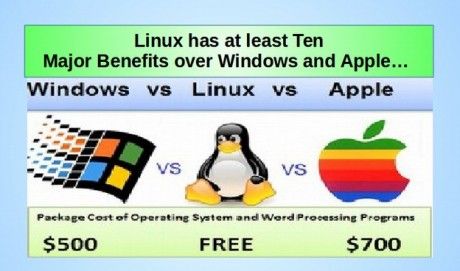 1.1 Top Ten Reasons to use Linux instead of Windows

In this section, we will review 10 important reasons to make the switch to Linux rather than shelling out another $500 for Windows 10 and Office 365. Hopefully after reading this article, you will have a better understanding of why we should all make the move to the Linux free open source operating system.

Throughout this book, we provide dozens of reasons to switch from Windows to Linux. For example, we cover several Linux customization options that simply are not possible with Windows. But there are some very important reasons to use Linux instead of Windows – reasons that go beyond merely the usual list of “Bells and Whistles” included with Linux that are missing with Windows.

Here is our list of the Ten Most Important Reasons for switching from Windows to Linux:

#2: Linux is more dependable than Windows.

#3: Linux is Faster... Windows runs slow because it has bloated software.

#8: Linux is much safer and more secure than Windows.

#10: All Windows 10 computers come with a hidden Kill Switch!

Let’s take a closer look at each of these ten fundamental issues.

Because Microsoft ended support for Windows XP and is forcing Windows 7 users to “upgrade” to Windows 10, Windows users face not only the “impending doom” of the Windows XP and Windows 7, but also the cost of replacing their previous version of MS Office with newer versions that cost about $500 – or paying a monthly fee from here to eternity. 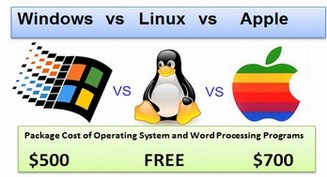 Let’s say, you buy a new computer every couple of years. By this point, you have been through the ringer of MS DOS, Windows 95, 98, ME, 2003, XP, Vista, Windows 7, Windows 8 and Windows 10 and many versions of Office. Each time Windows destroys your computer, you pay several hundred dollars for an upgrade that often works worse than the version you could no longer use because it was “no longer supported.” Folks are starting to add up the cost of all of these new versions. In most cases, it comes to more than $200 per year just for software! If you have a family and several computers, or a small business with computers, the cost quickly exceeds $1,000 per year.

Microsoft typically sells $90 billion in software every year – and makes more than $20 billion in profit every year! But instead of passing along some of these savings to their customers, Microsoft is now increasing prices in a very hidden way by moving to a “software as a service” (SAAS) model whereby you only rent their software for a month or a year at a time instead of buying it. Ironically, for all the money we are sinking into these over-priced products, we are getting a product that is worse than an open source option we can get for free.

#2: Linux is more dependable than Windows

The reason Windows 10 is so unstable is that, since the introduction of Windows 8, Microsoft has been trying to combine a “Metro” Operating System with a traditional “Windows 7” desktop Operating System. These are fundamentally incompatible objectives, as incompatible as trying to combine water with oil. The result is that the Windows operating system ends up not work well for either mobile or desktop usage.

Read more … 1.1 Top Ten Reasons to use Linux instead of Windows

1.2 Why Linux is More Secure than Windows

The primary reason Linux is more secure than Windows is that Linux does not have an open back door so nobody other than you can modify your computer.

A second reason open source is more secure than Microsoft is that it is a bottom up, community driven development model rather than a top down corporate driven development model. Throughout history, very little innovation has come from the top down. The top mainly want to protect the status quo. They are set up to actively discourage change and innovation. Meanwhile, open source is bottom up in that programmers are coming up with solutions for their own problems. They then share these solutions with others and the whole community benefits and moves forward in a rapid cycle of innovation – all due to a developmental model which encourages multiple points of view. In a 2007 presentation, Linus Torvalds, the originator of Linux, used the following diagram to illustrate the difference between open source and closed source program development:
http://www.youtube.com/watch?v=4XpnKHJAok8 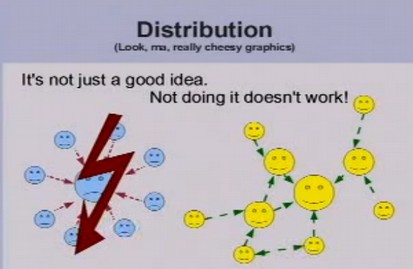 Linus explained that open source program development creates more branches to the tree which leads to more checks and balances, better decisions, more efficient merging of new ideas and a stronger, faster and more secure program. You build a better community by empowering everyone in the community. 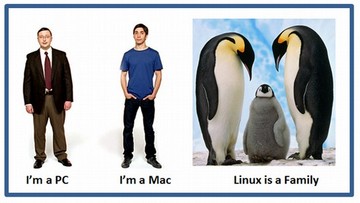 Open source programs like Linux do not have to worry about bloating their programs with complex code intended solely to maintain a monopoly. They are free to write simple codes that are easier to make compatible with other software and run faster in your computer. The result is that Linux uses eight different “security modules' which protect your computer from hacker attacks.

Read more … 1.2 Why Linux is More Secure than Windows

1.3 The Fatal Flaw of the Windows Monopoly

Have you ever wondered why the Microsoft Windows operating system is so much more susceptible to viruses and hacker attacks than Linux? Why does the Windows operating system need hundreds of “updates” every month? Why is it that Microsoft makes such a lousy operating system even though it has tens of thousands of programmers? Why it is that Windows has such an insane structure? Why does Windows come with two web browsers built into its core – neither of which can be turned off? Why are we so confident that Windows 10 will not be able to address the most important flaws of Windows 8?

The fatal flaw is the Microsoft Monopoly Business Model

To answer these questions, we need to understand that the structure of the Microsoft way of doing things is totally different from the Linux way. I understand the Microsoft way because, from 1985 to 2004, I had hundreds of Microsoft students attend my courses at Bellevue College. I spent thousands of hours talking with Microsoft employees. I knew more about what went on at Microsoft than most of their employees. Some of my students were responsible for coming up with creative ways to stop pirates from making bootleg copies of Windows. Imagine that was your job. What would you do? How would you stop the pirates?

The answer is that it is impossible to stop pirates from copying Windows because it is a digital program which is easily copied. All you can do is add complex keys and other gimmicks which prevent pirated versions of Windows from working. But for every gimmick Windows comes up with, pirates come up with a counter gimmick. So all the gimmicks really do is add more bloated code to the already bloated code of Windows. This is a huge reason why Windows is so much more bloated than Linux. Linux does not care if you copy their operating system – in fact they encourage it. But Microsoft does care about copies. So Microsoft uses a series of gimmicks to throw monkey wrenches in the path of the pirates.

Read more … 1.3 The Fatal Flaw of the Windows Monopoly

In this section we will cover what is perhaps the most frightening part of the Microsoft program to take control over our computers. It is a new program called UEFI. It can be more accurately thought of as the Microsoft Kill Switch. Microsoft has required that this sinister “feature” be added to all Windows 10 computers.

Microsoft creates obstacles to prevent you from adding Linux

Sadly, Microsoft does not want people to use Linux. Microsoft seems to be doing everything they can to keep their corporate monopoly. They want the money that will come from forcing XP users to pay $500 each to change from Windows XP to Windows 10. There are 600 million Windows XP users in the world today and Microsoft wants all 600 million XP users to spend $500 each to “upgrade” to Windows 10 and Office 365. Microsoft stands to lose $300 billion dollars if folks ever learn that they can easily switch to Linux and LibreOffice and get a much more stable and reliable word processing system for free. 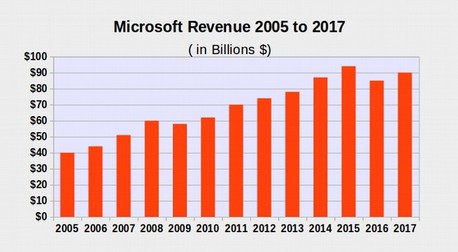 The Windows operating system is the key to maintaining the Microsoft computer monopoly. So Microsoft has placed all kinds of malicious roadblocks, obstacles and traps to prevent people from using Linux. Up until 2007, Microsoft maintained control over their lucrative monopoly by using their Internet Explorer Open Back Door to crash pirate copies of Windows. However, with the introduction of Linux Ubuntu and Linux Mint in 2007, suddenly computer users had a much better and more user-friendly option. It was only a matter of time before folks realized there was something better and that would be the end of the Microsoft Monopoly.

1.5 Case Studies on the Need for Better Tech Awareness

On the second Tuesday of each month, Microsoft issues patches on what has become known as Patch Tuesday. Unfortunately, Patch Tuesday leads to Crash Wednesday. Windows 10 downloads and installs patches whenever it pleases, and then reboots the computer.

But the notice included a total of 29 remote execution flaws affecting nearly every type of Windows program from MS Word to MS Outlook. 11 of the 29 critical flaws are present in or are a key component of the browsers built into Windows. Hackers can exploit any of these 29 Remote Code Execution flaws to take over a computer and then spread malware to other computers on the same network without any user interaction. But the Excel spreadsheet for all of the flaws actually listed 2,977 flaws being patched – making this one of the biggest patches in MS history.

The file size for just the August 2019 Update was 1038 Megabytes (over 1 Gigabyte). This is why every month that Windows is on your computer, it takes over more and more space on your hard drive. My high speed connection took over 5 minutes just to download this monster. Extracting the folder and opening it showed another zipped 1.1 GB folder. Extracting this monster showed 5 more zipped folders. The largest was 387 MB. Extracting just this one folder showed it contained over 7000 files.

The second folder contained another 7000 files. My guess is that all five folders contain over 20,000 files. The total uncompressed file size was 1.5 gigabytes.

Update File Size by Month… Each month Windows patches increase the file size by 1 to 2 GB:

For those keeping score, this is the fifth time in 2019 Microsoft has had to fix critical security issues with its Remote Desktop service. Updates to Windows 10 alone caused serious problems for users in January, April, October and November 2018 as well as February 2019 prior to the current ‘Awful April’.