In this chapter, we will compare various Linux laptop options.

This chapter has four sections:

Below is an image of the Purism Librem 15 Laptop which currently sells for $1500. 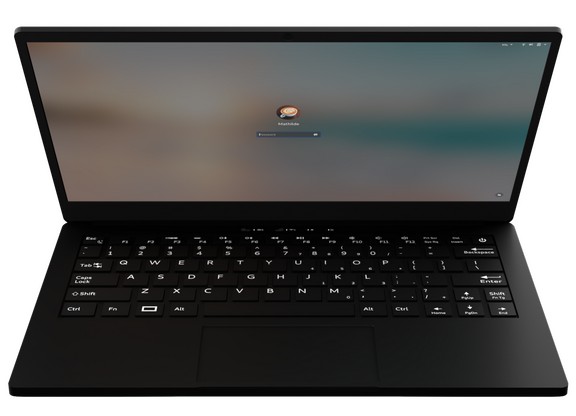 We also recommend the Pinebook Pro laptop which sells for $200 but requires getting on a wait list and waiting for several months.

There are more than 300 million Windows 7 computers that haven't been upgraded in more than 8 years. Millions of people are now using Windows computers that are very old, very insecure and can be hacked at a moment's notice. These people can not update their computers to Windows 10 because their old computers do not have enough RAM. What will they use for their next computer? There are also millions of high school and college students who need a computer to help them complete their assignments. 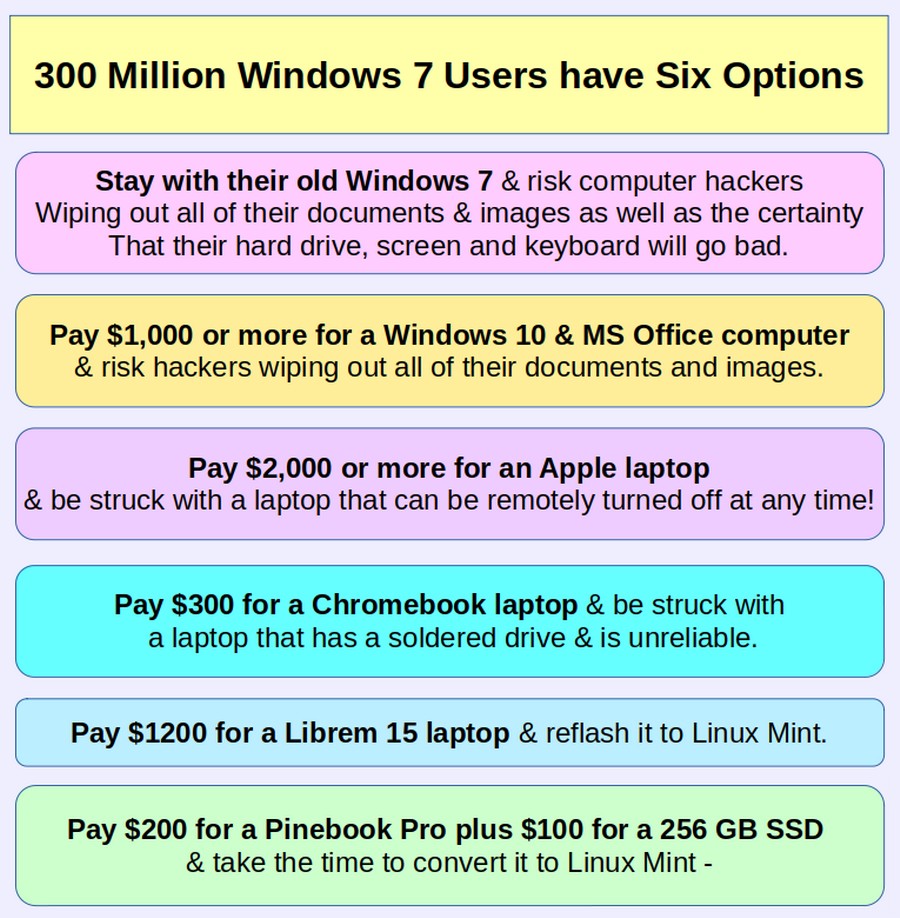 Previously, we explained why Linux computers are the fastest, safest, most dependable and secure computers in the world. The only reason they are not more popular is that, due to Microsoft and Apple monopolizing the computer market, it is very difficult to even purchase a Linux computer. In this article, we will explain why you can and should seek out a real Linux computer.

In the last section, we explained why it is important to get a laptop with the Coreboot Startup program rather than the UEFI startup program. Unfortunately, there are very few computer companies producing computers with Coreboot. For example, a company called Minifree produces the only computer certified by the Free Software Foundation. It is a 12 inch laptop that costs about $600 and uses an offshoot of Coreboot called Libreboot. They also sell a 14 inch model for $900. However, these supposedly “state of the art” computers are actually 2008 Lenovo Thinkpads with some minor alterations. Equally bad, neither of these computers have wide enough screens to allow side by side editing. In fact, the screen resolution on these two computers is only 1280 x 800. Side by side editing requires at least a 14 inch high-resolution 1920 x 1080 screen if you want to have a browser and document open at the same time on your desktop.

In the past, the easiest way to create your own Linux computer was to convert any Windows 7 computer made between 2009 to 2012. The five steps are to put all of your documents on a jump drive, then download Linux Mint and create a Linux Mint Live USB stick. Then set the BIOS of the computer to boot from a USB. Then start the computer with the Live USB Stick in place. Linux Mint will replace Windows. Add back your documents to the Mint File Manager and you are free! You can also replace Windows with Linux Mint on a UEFI computer. But you still have the UEFI backdoor and there is no way to remove it on a UEFI computer.

The least expensive option is to purchase Pinebook Pro laptop and use U-boot. This option is $200. However you might have to wait several months to get a Pinebook Pro. Also, by default, Pinebook Pro laptops come with an Emmc hard drive. Thankfully, these are NOT soldered in place. They are removable and can be replaced with a NVME hard drive for about $100. The EMMC drive that comes with the Pinebook Pro is functional for most things. But if you are going to manipulating larger files (such as writing a 400 page book or editing a video), then you definitely want to upgrade to a better hard drive.

Why The Pinebook Pro is a Revolution in Computer Technology

The Pinebook Pro may be the most important new computer ever introduced. Historically, full sized, fully functioning laptops with high resolution screens have cost more than $1000. Adding commercial software often doubled this price. This high price put fully functioning laptops outside the range of most low income parents and cash starved school districts to purchase for their students.

The Pinebook Pro has a retail price of $200 and comes with a 64 GB removable Emmc Drive. It can be upgraded to a 256 GB Solid State Drive for $100. This puts its retail price with a large hard drive at $300 – making it much more affordable for parents and schools than any fully functioning laptop ever.